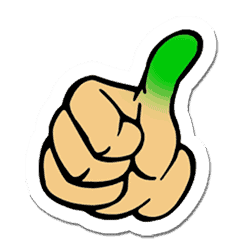 ​Cucumber Harvest | When to Pick Cucumbers

One day my parents said they would visit us about lunchtime. Tim and I were excited and we started planning. They just love crunchy cucumbers and there was Tim’s garden so that was fine.

About lunchtime we heard the car. I had a last look at the table and, Oh no, The cucumbers were not on the table! With scissors in hand I ran out, clipped four firm ripe cucumbers, sliced them and dashed to the table. Phew! That was exactly when to pick cucumbers, I told myself.

When To Pick Your Cucumbers

Many ignore the seed packet and yet it’s the first clue that’ll help you ascertain the length of your cucumbers and when they’ll be ready to harvest after germinating.
The information will give you some idea of the growth path of your cucumbers.

This is the first give away sign that tells you the cucumbers are on their way.
The plants produce two types of flowers, male and female and it’s the female flowers that carry your cucumbers.
You will notice a swelling immediately below the flower stem. This swelling signifies the beginning of your cucumber. 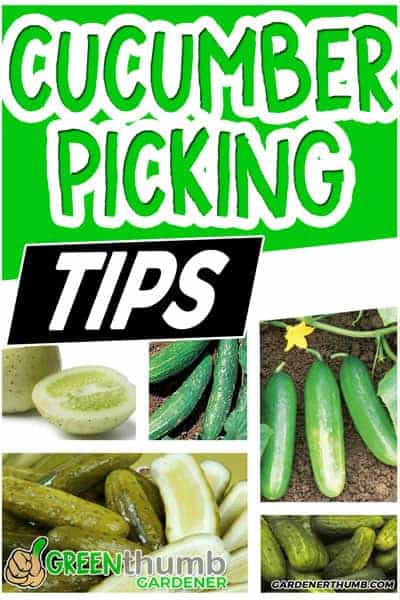 Length and Size are Important

From here on you will keep noticing a continual change in the length and size of your cucumbers until they reach maturity and are ready to harvest in the next 8-10 days after the female flowers bloom.

The ideal length of your cucumbers should be between 6-8 inches long but always keep in mind that from germination, your cucumbers can be harvested at or between 50-70 days depending on the variety grown.

Cucumbers can be divided into 3 basic types, standard, dill and large cucumbers.

​What else would you need to know before you get into your cucumber harvesting spree? #gardentips #gardening #prepping

What to Look For When Picking Cucumbers

Now that you know what slicing cucumbers, dills and large cucumbers are and the right time for harvesting them, what else would you need to know before you get into your cucumber harvesting spree? Read on to find out.

Size tells you that your cucumbers have reached their maturity for specific purposes. You already know for instance that dills are ready for picking when only 4 inches long, for pickling 2 inches and slicing 6-8 inches long and so on.

However connoisseurs say cucumbers taste best when they are 5 – 8 inches long. We shouldn’t argue with that, after all it’s a matter of taste!

The ideal color progression for cucumbers is dark green when from the “swelling” stage and they maintain that color throughout their growing life. Nevertheless, cultivars are known to develop a white or yellow color when they mature or ripen for picking.

However, the safe color to stick to is dark green. Please note that if a dark green cucumber has turned yellow, it means it’s been on the tree too long and the taste will be bitter!

Under a gentle squeeze, perfectly mature cucumbers will give in very slightly but still maintain their firm feel.

This signals that the cucumber is begging to be picked and you should have no doubt but to do so and enjoy later. After examining a few more you will end up deciding they are all fit to be harvested.

The three characteristics mentioned above all indicate that your cucumbers are ideal for picking and you shouldn’t have any doubts whatsoever to begin harvesting the fruits of your hard work.

​How to Harvest Your Cucumbers

​Now for harvesting your cucumbers the right way so that you and your plant can continue your happy twosome relations that began from the time you started cultivating your plants.

Here are some proven methods of harvesting your cucumbers:

As already said, monitoring your plants from day one is critical, especially towards the start of harvesting.

You should know by now how many cucumbers you are going to harvest and also remember, the more you harvest, the more cucumbers your plant will produce.

Experts say the best time to begin picking your cucumbers is in the morning when everything is cool. 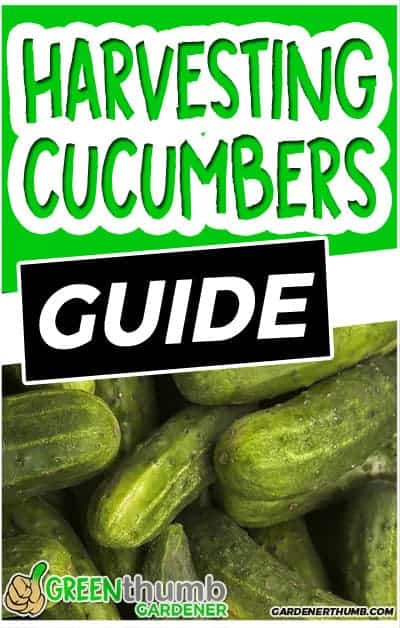 When you have harvested all the mature cucumbers, you are now in balancing territory. This means you should pick your cucumbers every other day (preferably the slicing cucumber group) for your own needs.

By doing this you cucumbers won’t grow too large or have a bitter taste from being too mature.

Getting Rid of Weak Plants

Check your plants to determine their performance and you will notice that some plants don’t measure up. The cucumbers they produce are stunted and fail to reach proper maturity. Others have turned yellow betraying over maturity. All must be discarded to give the productive plants room to grow well.

Pulling and wrenching will damage your vines so use sharp instruments (shears or large scissors) to cut the cucumbers about ¼ inch above the fruit while holding the fruit with the other hand to avoid dropping and bruising the cucumber.

Yields may decline when you twist or pull the vines.

​The cucumbers they produce are stunted and fail to reach proper maturity.  Grab these tips to improve your harvest #preppers #prepper #growyourown

There’s nothing better than to learn from planters who’ve not only succeeded in growing cucumbers but who’ve also successfully stored sliced cucumbers. Here are a few tips from such enterprising planters:

Cucumber Slices in the Fridge | 6 Tips For Freshness

Dampen a paper towel under cool tap water making sure you squeeze it to expel excess water.

Cover the exposed (skinless) parts covered with a paper towel. 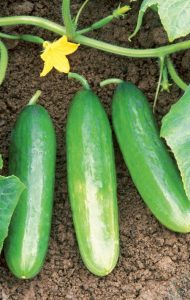 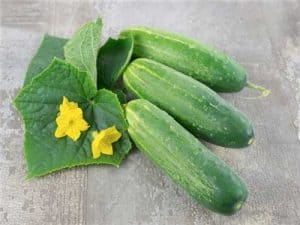 ​Do this by placing the pieces of cucumber in the middle of the bag and fold the ends to entirely cover the cucumber slices.

There is a minimum amount of moisture present so the slices won’t turn mushy. 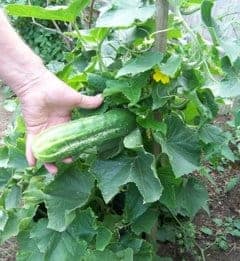 A resealable bag can also be used.

Leaving the bags open permits moisture to escape and not collect around the slices and turn them mushy.

​Tip #4: Place the bag in the veggie drawer or crisper 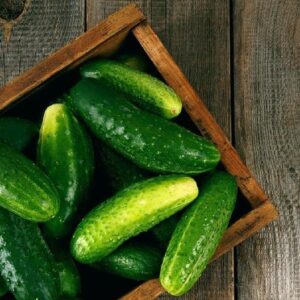 These are ideal places being the warmest part of the fridge.

You can also put them at the front of the middle shelf away from colder air collecting at the bottom and freezer compartment. 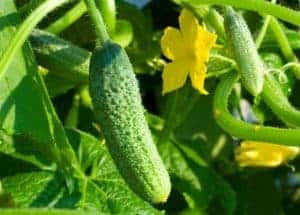 Cucumber is sensitive to ethylene produced by fruits.

Store your cucumber slices opposite from fruits if possible or use containers to reduce ethylene intrusion.

Fruits such as tomatoes, pears, bananas, apples, peaches and melons all exude ethylene. 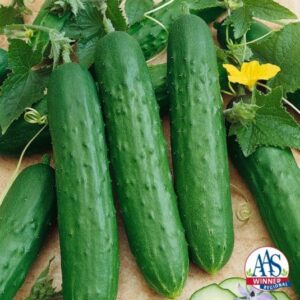 Plan to use the sliced cucumbers within 2 days tops.

However, if you use these tips, it’s most likely that your slices will remain good for a week.

Cucumber Slices in the Freezer | 6 Tips

​Tip #1: Use a cold resistant bowel for placing cucumber slices 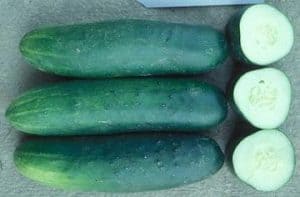 Place slices in a single layer and spread out to make salting them easier. 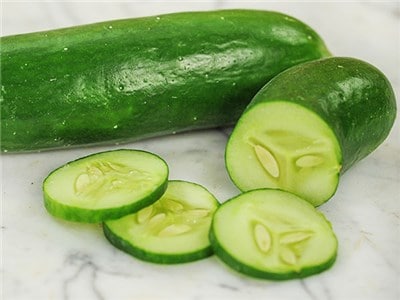 ​Use a tablespoon (14.8 ml) of salt for 7 cups of cucumber slices but for less cups, use less salt.

Use salt or spoon for evenly spreading the salt. You can also use your hands to mix the salt with the slices. 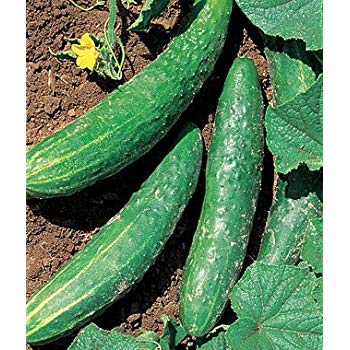 To add crisp to the slices, cover the mixing bowl with a towel and place some ice on the top. 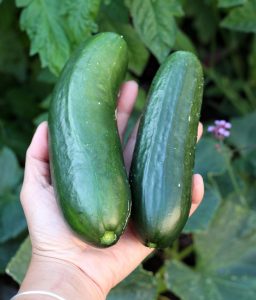 Remove the bowel from the fridge the day after and pour out the water.

Squeeze out excess water by hand or with a kitchen tool so that the slices remain crisp. 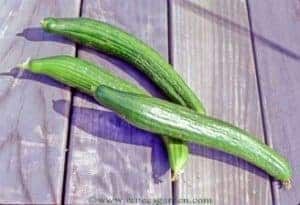 Add distilled white vinegar and white sugar in a bowl and mix them.

Let the cucumbers soak in the mixture for a few minutes until the sugar is dissolved.

Adjust the taste as you see fit. Sweeten the slices by adding sugar or produce a taste of sour pickles by adding more vinegar.

​Tip #6: Back to the freezer in freezer containers

Take the bowel out again and transfer its contents to the resealable frost-resistant containers with the sugar and vinegar mixture as well.

There’s only ¼ inch space up top but the sliced cucumbers will last a whole year, fresh and crisp.

Growing cucumbers and relishing them all year long through the four seasons with proper storage is a great accomplishment in itself.
However nothing can compare with the delight in planting your cucumber plants, watching them grow and producing a bounty that signals when
to pick cucumbers so you and your family can enjoy them. There’s no feeling like it anywhere, any time.  ​

We feature tips, tutorials and reviews for your gardening needs. We love to grow an abundance of vegetables, fruits, and flowers.

We are very passionate about gardening and helping others tend their gardens.  Please let us know if there is anything we can do to be of service to your gardening needs!

This may be a good place to introduce yourself and your site or include some credits.

gardenerthumb.com is a participant in the Amazon Services LLC Associates Program, an affiliate advertising program designed to provide a means for sites to earn advertising fees by advertising and linking to Amazon.com. Amazon and the Amazon logo are trademarks of Amazon.com, Inc or its affiliates.

5 Free Garden Hacks That Save Me $512 Each Year

Enter Your Email Below & Get 5 Free Garden HACKS for FREE!